In the home studio with legendary drummer Mike Portnoy

We recently found out that Mike Portnoy is using LEWITT mics on his drums. As you might assume, we felt honored but we were also curious to find out the whole story.

We’ve reached out to Mike and he told us, that his recording engineer always brings them along to track his drum kits.

After Mike was so kind to introduce us to his engineer Thomas Cucé, we talked with him about the production process behind Mike Portnoy's drum recordings to answer the question of how one sounds like Mike Portnoy.

[LEWITT] How did you meet Mike Portnoy, how long are you working together?

[Thomas Cucé] I know him since he is the dad of one of my friends. Mike and I are friends too since we’re already working together for quite a while now. We’re kind of in quarantine together, since I’m just living 5 minutes away from his studio. Since I don't like Mike’s mics, I was bringing my LEWITT mics every time with me over there.

[LEWITT] We’re curious, how have you heard about LEWITT microphones, and do you have a favorite?

[Thomas Cucé] I’ve heard about you for the first time from a front of house engineer who talked very highly of you. So I’ve looked into the LEWITT mics a lot and a couple of years ago I got myself a DTP Beat Kit Pro 7 and I’ve been using that in my studio to record drums ever since.

I have an LCT 440 PURE that I’m using most of the time for all kinds of sources. When you get into higher-end microphones, you start to get these nuances – may be something that the average listener can’t hear - but as an engineer, you do pick up on. Of the mics I’ve used so far, that I definitely like a lot is the LCT 440 PURE. 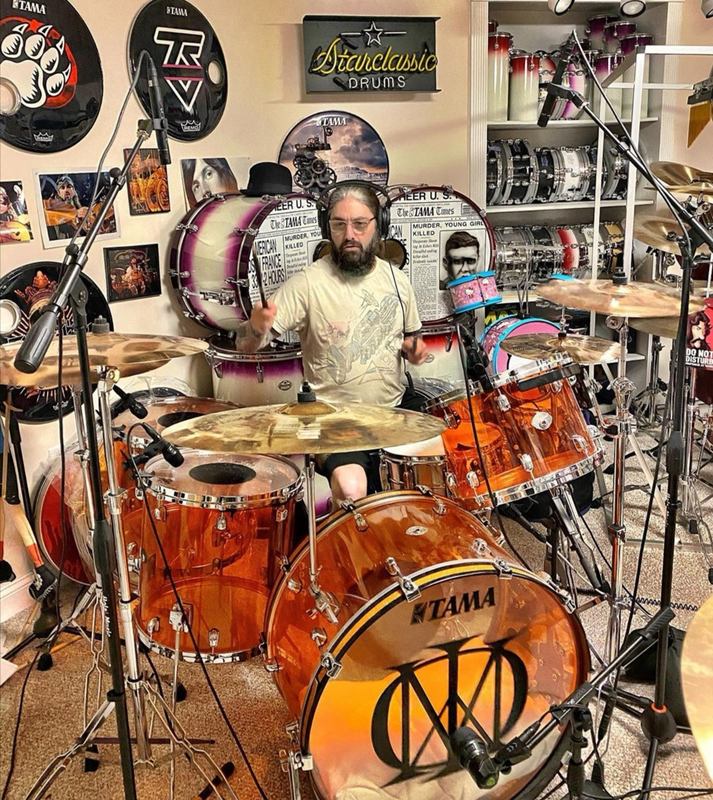 And also the DTP 640 REX, I like to have a condenser and a dynamic capsule in one housing. And the fact that they’re phase-aligned is really useful. So it is one of those two, but maybe I’ll come back to you in a few weeks and let you know if anything changed. I have not used the LCT 140 AIR yet, with the two modes AIR and CLEAR - this one sounds also very interesting to me.

[LEWITT] Let’s talk a little bit about the recording chain and how you capture the performances of a legendary drummer like Mike Portnoy. Let’s start with the drum kit’s Mike is using...

[Thomas Cucé] His main kit that he uses for most very technical, difficult sections and all his super progressive elements, is the Avenged Sevenfold kit. It has 15 different cymbals – obviously, you can get all different kinds of tones out of it. It consists of 2x kick drums, 1x snare, 2 x hihats, 6x toms, 4x octobans, 1x big gong drum, 3x overheads.

Then he has a smaller kit, which is a clone of the Ringo Star kit. It is much more condensed, small, and has only two or three cymbals. He uses it for his subtle groove sections. So if you’ve seen the song Mike Portnoy posted recently on his YouTube channel you can listen to that kit - and we’ve used all the LEWITT mics on it.

The third one is called the Bonzo kit and it is from the Octavarium era of Dream Theater. When he recorded Ovtovarian, he used two different kits – one was a big technical kit and the other one (the Bonso Kit) was a more condensed kit, but with huge big-sounding toms. I believe the floor tom has a diameter of about 20". He uses it for his big anthem sections.

[LEWITT] Are you usually switching around parts of the kits?

[Thomas Cucé] The kick drum and toms never change. Very rarely we switch hi-hats or cymbals – every kit has it’s own purpose so he usually has them set up the same way.

With the Ringo kit, for example, he has the same snare and cymbals that have been set up for years - since he used them for a Beatles project he did years ago. So that kit is the kind of dead sounding kit. What we actually did when we recently tracked with it was to put paper towels on it to get it sound even more dead. We were aiming for a super dead sound. So there’s always something new.

With the Avenged Sevenfold kit the snare is changing pretty often, depending on the sound, Mike is aiming for the project.

[LEWITT] How many microphones are you usually using?

[Thomas Cucé] We have 22 inputs for the Avenged Sevenfold kit, sometimes when he is using an extra overhead we have 23 inputs. I’ve found myself tracking the two kick drums using the DTP 640 REX in +/+ mode where the dynamic capsule boosts the range of 3-5 kHz, while the condenser capsule boosts frequencies 70-150 Hz - it is a really full-bodied sound. And since Mike has two kick drums on that kit, that way I have 4 inputs capturing the kick drums alone.

[LEWITT] You’ve mentioned the two kick drums: is there an upside/downside between using a double pedal on a single kick and using two separate kick drums? Besides using a lot of space, does it make your job easier or harder if there are two?

[Thomas Cucé] For the sake of simplicity I would say double kick pedal all the way. Two kick drums complicate things. You have to worry about several things. For example, when editing it, it presents kind of phase issues of the kick drum resonance and stuff like that. But the main thing is that you have to take care of the tuning of each kick drum.

I’ve actually learned a lot from Jerry Guidroz - he has engineered about 25 albums of Mike. Jerry talks about kick drum tuning a lot and if you tune it slightly differently, the listener won’t really hear it, but that’s how you get a slightly different interesting sound, you’ll notice. It only comes out when you play double base with two kick drums. It’s cool in terms of resonances, but it does complicate things when it comes to editing.

[LEWITT] You’ve mentioned phase issues, at what point are you looking into the phase relationship between the signals? Is there always time for checking on that or do you time-align the signals later in your DAW?

[Thomas Cucé] The positions where I could think phases can be a problem are the snare drum mics. All the other positions are mainly aligned pretty well. I usually check after the fact.

In sessions where we’re switching kits, we don’t spend a huge amount of time checking on everything. With everything being so easy to be aligned after the fact you kind of get lazy. Whenever I’m setting up the snare I’m using my two fingers and measure from the source and make sure the top and button snare mics are using the same distance. So I’m trying to align them by keeping the same distance and I’m trying to minimize the phase problems I’ll face after the fact that way.

[LEWITT] What’s your general approach when it comes to recording drums?

[Thomas Cucé] It definitely depends on the project – the last project I’ve mixed was a 70’s retro cover song that needed much more overhead to achieve that kind of sound whereas when you crashing hard on cymbals your overhead mics capturing more of the cymbals because you’re hitting so hard that the snare sound is not so much getting through on the cymbal mics. It still depends on the project, but it is mainly close mics for most of the stuff he does.

[LEWITT] Do you have something like your go-to overhead micing technique?

[Thomas Cucé] Like I said, with Mike’s Avenged Sevenfold kit you have so many different cymbals. When you have so many cymbals it can be a struggle trying to record them all and to retain the stereo image that puts you into the drummers' perspective where you can hear all the cymbals. That comes down during the mixing aspect - which I’m not always doing btw. I’ve been doing the mixing for all of his home projects at the moment, but the high profile projects are going to the high profile mixers. I record everything dry since I don’t know where it is going and the mixing engineer of the project has to be able to make it fit wherever it is needed.

[LEWITT] Do you use any unusual mic techniques on the drums or do you like to experiment with positioning?

[Thomas Cucé] Again, this depends on what the project needs, and I rarely ever do the same thing the same way. Plus if I’m not mixing it, it also depends on what the mixing engineer wants. A few weeks ago we did a more a Beatles kind of song and they’ve used a mic that’s almost like an overhead: a single mono mic behind the head of the drummer – I've tried that out. But most of the time I’m using close mics. 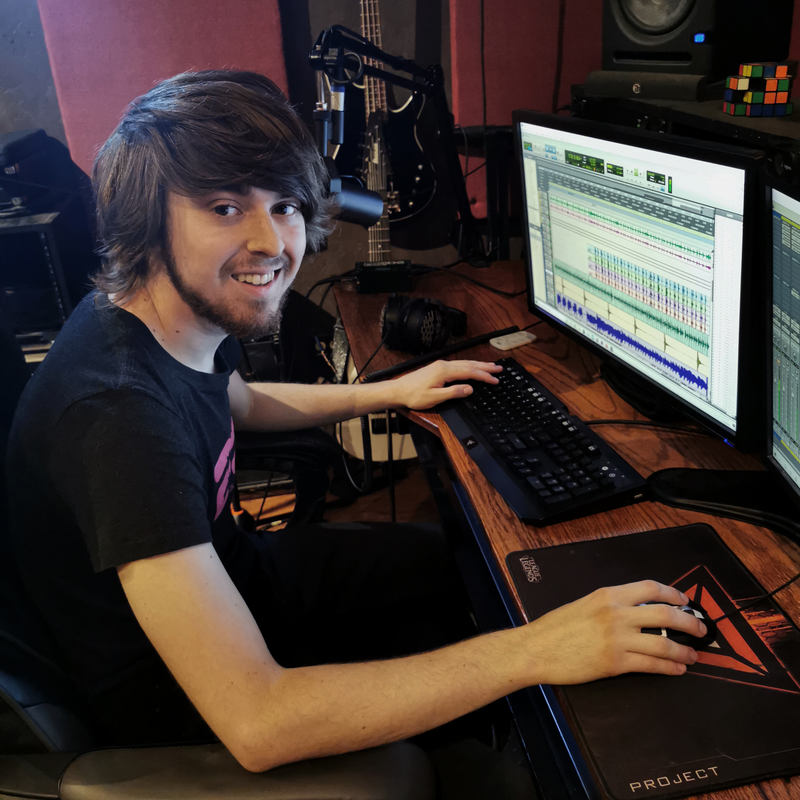 Thomas Cucé is an audio engineer and musician with over 8 years of experience in the music industry. He created Evergreen Recording Studio in 2016 when he recorded his band, Next To None's sophomore album, Phases.

Thomas has recorded with prominent artists such as Mike Portnoy, David Ellefson, Ron "Bumblefoot" Thal, Alex Skolnick, and Derek Sherinian. He has also teched in the U.S. and Europe for the progressive metal band, Haken.

The best microphones for drums

Drum recording is one of the most exciting things ever; it's a form of art. Find out how these microphones can make your drum sound easily stand out.

How to disinfect and clean a microphone

Project 1040 - How community feedback has influenced the development so far

Find out how your feedback changed the development of the ultimate microphone system, how the beta tests went, what changes were made, and how it all started.