Recording harp for the first time

I’m Miguel, a recording engineer from Belgium, and in this article, I’m writing about my experiences of recording harp for the first time.

Over the years, I assisted in several sessions where we recorded a harp, and I realized that everybody used a different technique recording it. Some recorded it in mono, some recorded it in stereo, and I always wanted to record it one day by myself - it’s a beautiful instrument. I like the challenge to record instruments I never tried before. I asked my musician friends if they know someone who plays the harp. That’s how I found Julie.

Julie plays the harp since she’s eleven years old and already recorded some solo and orchestral tracks. She told me it's a different experience than playing live. While she enjoys the interaction with the audience during her live performances and finds inspiration in this situation, it can sometimes be challenging to create a satisfying piece of music in a recording situation. This is due to the focus on sound and the lack of the audience.

I have different condenser mics in my mic locker, but I was always unsure when it came to choosing a mic for the specific application. But since I have the LCT 440 PURE, I feel like this mic is all I need. It sounds good on everything: Cello, drums, guitars, vocals – so I gave it a try on the harp, and believe me, it sounded perfect.

The room I used to record the session was everything but ideal. It was in the hobby room of my parents. It's a big room, about 10 square meters on 4 square meters, plus it has three big windows on one of the walls, all single glass. You'll probably ask yourself why I recorded in such a big room, not even treated with acoustic panels, and so on.

Well, I'm always looking for new challenges, and since I'm in the process of rebuilding my studio at the moment, I needed a room, so I thought it was perfect. I also recorded there with the band Sonderwålt, which I wrote about on this blog a while ago. I took the same spot where I recorded the cello with Sonderwålt last time, and it's the sweet spot for some instruments. If you have a look on the pics, you'll see, that I positioned the mics very close to the source, because the room itself does not have a great sound, and for this project, my main goal was to get the sound of the harp, not the place.

So I recommend that if you get in a similar situation, look up for the sweet spot in the room, trust your instinct and go with the flow.

I tried different stereo techniques in the session: AB, XY, and other stereo settings with two mics. For this recording, I used a MacBook Pro from 2012, ProTools 11, an RME UFX and a pair of CAPI VP28.

You'll be able to listen to the unprocessed tracks, but I've also added the mixed versions.
I added an eq, to clean the recordings up, then a compressor to bring up some details like her fingers touching the strings, I sent the tracks to a reverb, and short delay, just played around with it till I was satisfied, and at last I added to the master fader a virtual tape machine, to give it that extra warm sound.

I chose a typical stereo setting. Nothing spectacular, but the two mics were at the same distance from the harp, pointing to the center of the instrument. I found this set up a little bit challenging since you can quickly run into phase problems. Both mics were set up in a distance of 80 cm, which is the same distance to the center of the harp where the high strings are. This is the spot I found best for that position. Of course, you can get closer or try to go further from the instrument, which depends on the sound you want to achieve. This position gave me a delicate balance of all strings.

I used the A/B stereo mic technique; both mics set up in a distance of approximately 50 cm (20") from each other. The right mic (B) is closer to the instrument than A. In this picture, you'll see mic A (left) in front of the source. In this case, I've set them up at 30cm (12") apart from each other. This worked best for me. They’re both on the same level pointing to the instrument in a distance of around 80 cm to 1 m at a level with the harp player’s hands. With this mic placement, I was also able to capture those soft movements or little cracks of her hands, and the harp sounded fuller and warmer than in the first setup. If you go too close, it will get boomy, so make sure you're in the right spot.

In this setup, I was almost recording with an X-Y technique. It's not the best way, but as some say: if it sounds right, then it is right. Sometimes you have to go with the flow, listen to the instrument, and understand what it does. It won't matter what kind it is. A guitar, cello, banjo, or a harp, I'll still get that warm and rich sound.

Here I've tried to do the Blumlein technique, but since the LCT 440 PURE is no multipattern mic, it does not feature figure-of-eight. So I’ve ended up using the X-Y techniques. This time, they are on top of each other, which is by far, my favorite. It gives you that sweet, balanced sound from the instrument. We ended up recording the full song in this position. We did some other songs as well, to give you a better idea of the results this position can provide.

For positions 2,3 and 4, the mics are at the same level and the same distance from the instrument. If you are planning on recording the harp for a track with other instruments and you are rather playing high notes than lower ones, try placing a towel between the strings. This way, the lower strings won't resonate, and the harp will give you a more beautiful sound. 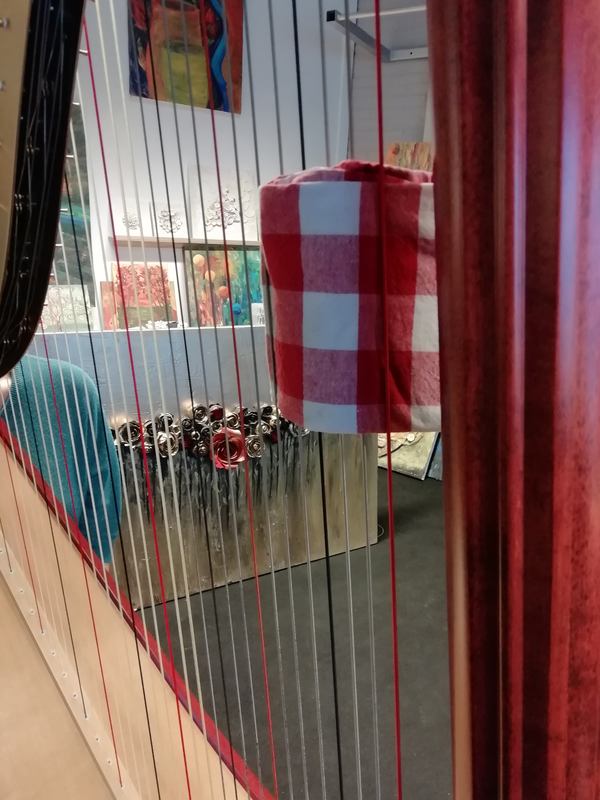 Recording the Game of Thrones intro with a cello

I’m Miguel Costermans and I’m originally from the Dominican Republic, but I moved to Belgium in 2007. I play guitar, bass, a bit of drums, and basic piano and I…