We met the band after the session at Metropolis Studios and talked with them about the recording process of their album, and the idea of doing a mixing contest with a live performance of their single Move Like A Ghost.

Saint Agnes is a four-piece rock band formed in East London in 2014 after Jon James Tufnell and Kitty Arabella Austen discovered a shared musical belief in the power of rock and roll.

Ben Chernett and Andy Head joined the two later and a string of singles followed over the years before the band released the Death or Glory Gang EP in 2018. This year, Saint Agnes released their much-anticipated debut LP Welcome to Silvertown.

We met the band after a live recording session at Metropolis Studios and talked with them about the recording process of their album, and the idea of doing a mixing contest with a live performance of their single Move Like A Ghost.

[LEWITT] Please tell us about the recording process of your album?

[Kitty] We recorded our album at a place called the Tilehouse Studios outside of London which was originally built for Mike Oldfield in 1981. His son Luke is the engineer there and we booked the studio for 10 days, where we recorded and mixed the entire album.

We recorded to tape, which was quite important to us because if you’re recording straight into a computer you have a lot of options all the time. You can have a thousand different guitar sounds, a thousand different vocal sounds and for us, we’re so indecisive, if we would have had all these options, we would definitely have used them. So we decided to record on tape to cut off all the options. We recorded every song in a couple of takes and then we decided, which take we’re going to use on the album.

And it was really fun actually, taking away the stress of having to decide a thousand different things. When we played it that time, it felt very good, it sounds very good – there might be a few mistakes in it, but we can live with those because the rest of it is really vibey. Recording on tape was really exciting because I haven’t done it before.

[LEWITT] Did something unexpected happen when you recorded the album?

[Jon] Yes, when we recorded, the tape machine broke about halfway through and it broke in such a way that it meant we could record, but we could not rewind. The only way to rewind it was to take the tape off, flip it over and fast sort it, which was a process that took 20 minutes.

So we decided that we would record on tape to limit ourselves and make things kind of difficult, and it became incredibly difficult and incredibly slow. But this was the reality, this was what we’ve chosen and this kind of things can happen.

There were only a few people in the country that could fix this machine and we had to wait for them to arrive. Until then we had to make this work because money will not appear out of nowhere. So the next time we’re doing a take, we had to do it right.

I think Witching Hour was the first song we recorded post-machine-breaking and that came about as a one-take song and we where like, that’s fine, it is what it is, let’s just roll with it.

I think for us as a band it was incredibly important to embrace who we were that day and kick against that idea of endless options and possibilities to fix things. We are who we are: We know we can play these songs live and just let’s not overthink it – it was great!

[LEWITT] What do you think about the mixing contest?

[Jon] I’m very excited. I ended up mixing this record – I mean it wasn’t our original intention, but I mixed one song at the end of tracking and the rest of the band really liked it, so I got the job.

I think a lot of musicians are now self-mixing as the tools are so good that you can have at home. So much of what is important is having a vision you want to achieve. That is more important than anything else and now people can do it themselves, I think it is great.

I’m really excited to hear with a song that I know inside out, what people might be able to do with it and how people will take it to the next level.

The scope for creativity is really high, our songs are quite bare bones in a way, we don’t have lots of pre-programmed things happening, we’re not playing to a click, there’s a lot of freedom, I mean people could turn the gain up and turn it into something really aggressive and heavy – I'm just interested to see, what comes out of it!

[LEWITT] What would people need to do, so you like the mix?

[Jon] I think the most important thing about it is to not respect what we’ve done too much – just have fun with it! Nothing we do is sacred, because everything is just about the moment. What we believe is that the take we did that day is the take we did that day, and the take we might do the next day is totally different and they both are as valid as each other. So, don’t try and regiment it into a boring version, embrace the mistakes, turn them up as loud as possible, have feedback as loud as possible, that day is what matters. 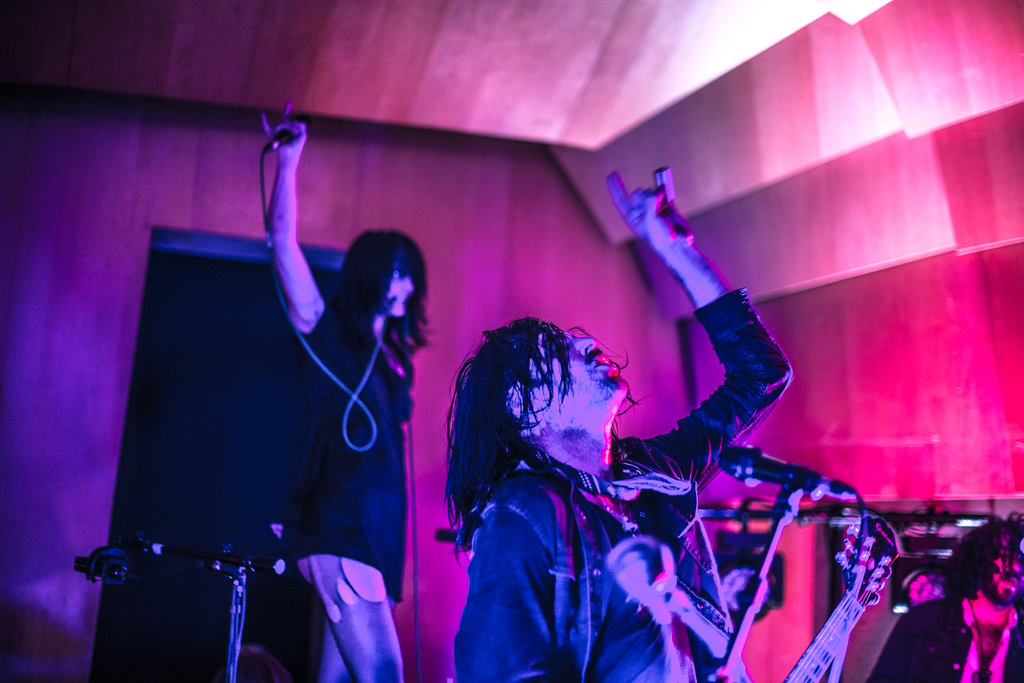 [Jon] For us 2019 is the year, where we’re playing as many live shows we can humanly do. In October we’re doing a UK tour, we gonna play at Dingwalls in London, which is going to be our biggest headline show to date. We’re trying to make something really special to happen for that show.

We’re writing things behind the scenes right now, who knows what’s gonna come out of those sessions – there are no promises there, but the main thing is, just come and see us live.

I think what we’re doing right now fills a gap that is the band that we wish existed and I think there are probably other people out there that feel the same. If you like your rock’n’roll loud than come and see us.

Be part of the mixing contest feat. Saing Agnes